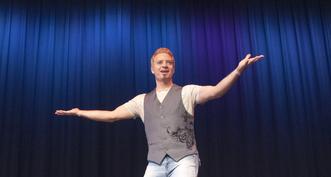 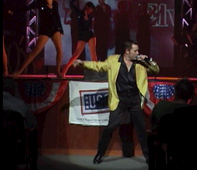 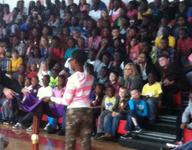 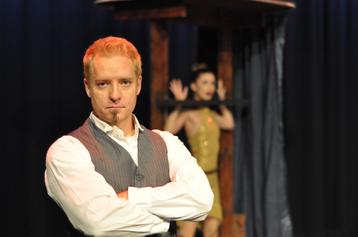 Fun facts: 2018 saw Russell as a featured character in the HBO pilot "Righteous Gemstones" starring John Goodman and directed by Danny McBride. Russell is excited for it's release and will mainly be featured in the four person 'pop group' scenes. Look for it's release exclusively on HBO in 2019.
Update: 2019 has seen more filming for the actual (beyond pilot phase) HBO series ‘Righteous Gemstones’! Russell’s scenes have included John Goodman, Jennifer Nettles (Sugarland - Country music star) and a laundry list of others…
In addition to being a stand alone actor, dancer, singer and illusionist,   Russell has the unique distinction of being North America’s Only Touring Singing Illusionist. Most recently you may have seen him touring his own show or featured in the Wonderland Circus (2017) tour as it's co-ringmaster and singing Illusionist.
Let Russell treat your guests to a one of a kind great time!  Whether you are selecting theatre dates, hosting a convention, presenting a red carpet themed gala, or want the best and most versatile entertainer for a fun corporate event...let Russell help you make your occasion unforgettable!
Russell Anderson's reputation is as a dedicated and skillful performer that creates gasps of awe and excitement along with side splitting laughter. Known as an ‘interactive entertainer’ he has the innate ability to make your audience laugh, smile, sing along, sit on the edge of their seats and rise to their feet with applause.  Russell's vast career has seen him as an actor, cabaret vocalist, ring master, dancer, magician and illusionist, and also as a seasoned motivational speaker.
His shows have been described by industry professionals as romantic, fun, moving and always exciting…and much more.  Russell "...is the closest thing you will get to Vegas in a box!" - Robert Ivey (Broadway performer, director and co-founder of Piccolo Spoleto)
Featured nationally at theme parks, globally on cruise ships, with the "Las Vegas Legends In Concert", the 'Opry & Opryland (with greats such as Doug Stone, Clint Black, Porter Wagoner, Tanya Tucker)…to sharing the stage with other industry leaders, pace setters and legends such as Wayne Brady, Bobby Rydell, The Four Tops, The Tokens, Elaine Boosler and countless others...Russell combines all of his unique experiences to create your "one of a kind, unforgettable event" - Beverly Stroman (Event Coordinator/Organizer).
Having won magic convention awards (juried by other professional magicians and illusionists) as far back as 2007, Russell's magic and illusions have catapulted him into the limelight. "He is an industry pace setter combining all of his talents into a singing-illusion show." - Bill Schlitt, Producer.
Combining such unique abilities and experiences - his shows lend themselves to fit a variety of large and small venues, productions, shows, events and occasions. Russell tailor fits his production to suit your program - because it is ‘your production’.  Spice up your event, ship's theatre, theme park or convention with the magical variety of Russell Anderson…Or just enjoy the most unforgettable and especially magical evening Ever! ​​